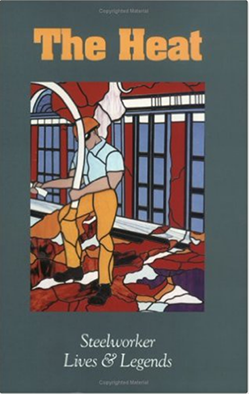 Grammar, spelling, reading and writing—these are not exactly the pursuits a steelworker would line up for after an overnight shift at the mill. Harmon Lisnow of the Institute for Career Development (ICD) at Merrillville, Ind., knew that when he set out to advertise a creative writing workshop to the 25,000 steelworkers of northwestern Indiana. He invited them to “tell their stories” for a possible book on life in the mills, and, to help them, chose poet author Jimmy Santiago Baca, who learned to read and write in prison and whose charismatic style, Lisnow knew, would put workers at ease.

The first 20 middle-aged steelworking storytellers had a lot of cynicism, Lisnow recalls. “They didn’t expect much out of it,” he says. “They kind of laughed and said, yeah, right, my story.” But once Baca convinced them that grammar and spelling weren’t an issue, they were staying up nights (or days, as the shift might dictate) writing. Within three weeks, Baca had enough material to create The Heat: Steelworker Lives & Legends, which he edited with Stacy James and published in October 2001.

The book, which is going into its third printing, has been reviewed by several major newspapers and National Public Radio and is for sale on Internet book sites. Other unions are looking into replicating the workshops for health workers, rubber workers and Teamsters at various locations around the country. Colleges are using it as a text.

The ICD has run basic literacy courses since the 1980s to prepare steelworkers for careers in the steel industry or in other fields. It is a joint educational and training program of the United Steelworkers and 11 steel companies, with courses at 40 sites throughout the steel belt. They now use “The Heat” in their creative writing curriculum and attendance at courses was up 40 percent last year.