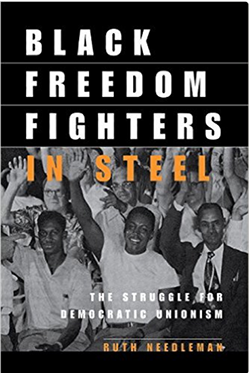 Black Freedom Fighters in Steel: The Struggle for Democratic Unionism

Thousands of African Americans poured into northwest Indiana in the 1920s dreaming of decent-paying jobs and a life without Klansmen, chain gangs, and cotton. Black Freedom Fighters in Steel: The Struggle for Democratic Unionism By Ruth Needleman adds a new dimension to the literature on race and labor.

It tells the story of five men born in the South who migrated north for a chance to work the dirtiest and most dangerous jobs in the steel mills. Individually they fought for equality and justice; collectively they helped construct economic and union democracy in postwar America. George Kimbley, the oldest, grew up in Kentucky across the street from the family who had owned his parents. He fought with a French regiment in World War I and then settled in Gary, Indiana, in 1920 to work in steel. He joined the Steelworkers Organizing Committee and became the first African American member of its full-time staff in 1938. The youngest, Jonathan Comer, picked cotton on his father’s land in Alabama, stood up to racism in the military during World War II, and became the first African American to be president of a basic steel local union. This is a book about the integration of unions, as well as about five remarkable individuals. It focuses on the decisive role of African American leaders in building interracial unionism. One chapter deals with the African American struggle for representation, highlighting the importance of independent black organization within the union. Needleman also presents a conversation among two pioneering steelworkers and current African American union leaders about the racial politics of union activism.

“This remarkable book reveals the hidden history of long-forgotten black steelworkers and their seminal role in the struggle for union democracy and workers’ rights on the shop floor. Ruth Needleman’s book is a critical text in the history of black industrial workers’ struggles and their contributions to working people regardless of where they may have toiled.”

“Black Freedom Fighters in Steel is a beautiful story of five black union organizers, long-distance runners who were indispensable to building the steel workers union as well as the civil rights movement in northwest Indiana. And they never stopped struggling, despite having to battle generations of white racism and intransigence in their own union. Ruth Needleman proves once again that African American workers have consistently sustained the most inclusive, radical vision of working class solidarity the U.S. labor movement has ever known.”