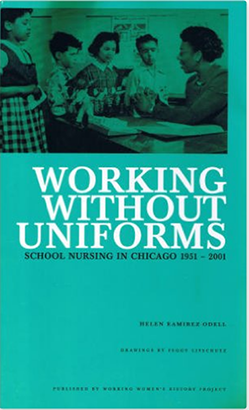 Helen Ramirez-Odell, school nurse with the City of Chicago Public Schools for over 34 years, has written a book containing 86 stories, brief and extended, based on interviews of Chicago school nurses, going back to the beginning of the program in 1951.

Nurses provide health care and health education to children in schools, ranging from prevention and control of contagious diseases to making referrals and health management plans for children with serious health problems. They have stayed on the front lines from the time of polio and tuberculosis scares to the modern crisis of AIDS. Not many people know the story of their work, but the book will change that and give us an inside view. “Our work as school nurses makes a profound difference in the lives of Chicago children,” she said.

Helen described her own interest in the history of her profession. She has been involved in the Chicago Teachers Union as a School Nurse Delegate and headed the union’s Women’s Rights Committee from 1984-2001.

“I was struck by the concept of ‘writing women back into history’ when it was first presented by the National Women’s History Project. I knew women were so often left out of history and I knew this was something I wanted to do.”

“The backgrounds of the women who became school nurses are fascinating and diverse. They are World War II veterans and civil rights activists as well as public health nurses, mothers and teachers. Being a part of the Working Women’s History Project helped me to gather a group of people to obtain the interviews and find resource people to help with other work necessary to the project. I think it’s important to research the lives of women who do traditional work and non-traditional work.”

Karen Egenes, a Loyola University Nursing Professor with an interest in nursing and labor history, wrote the Introduction. She also obtained historic photographs for the book and archives. Peggy Lipschutz provided original drawings to illustrate the nurses’ stories. Effie Mihopulos was editor. Dorothy Marks produced a video for the anniversary.

Alice Dan, Director of Center for Research on Women and Gender at University of Illinois at Chicago:

“Working Without Uniforms: School Nursing in Chicago 1951 – 2001 is an important historical document with vital relevance for school health issues today. Personal stories of certified school nurses over the past 50 years make a lively source of information on promoting health for children.”

“Working Without Uniforms: School Nursing in Chicago 1951-2001? is an important book that historians of women’s history can read and use with great profit. Such a volume is fascinating in its inclusion of authentic women’s voices; it is a valuable primary resource that provides information for scholars interested in writing the history of gender, social activism and professionalization in the development of the field of school health and nursing. Karen Egenes’ introduction does a fine job in providing a historical context for the interviews. Helen Ramirez-Odell should be commended for her vision and talent in bringing this volume to fruition.”