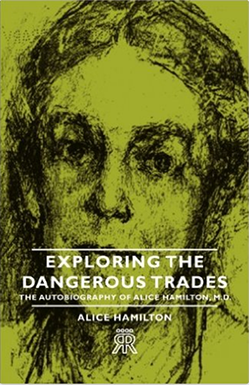 Exploring the Dangerous Trades: The Autobiography of Alice Hamilton MD

Picture yourself being slowly poisoned to death at work. It was common in many dangerous trades at the turn of the twentieth century, the risk of taking an industrial job. There were no laws to protect workers in factories, no OSHA, no workers’ compensation. Dr. Alice Hamilton wanted to take on the problem of industrial poisoning. When Alice Hamilton began her work in the new field of industrial toxicology, few worried about chemical hazards at work. Many victims were recent immigrants afraid to complain. Most did not know the risks. “The poor must take dangerous jobs, or have no jobs at all,” she wrote.

Alice Hamilton was born in 1869 and grew up in Fort Wayne, Indiana, part of a generation of progressive women who took active roles in changing society for the better.  She had a medical education from the University of Michigan and a lifetime of 101 years to devote to it. First she taught women medical students, referred to as “hens” by male doctors at Northwestern Medical College. She spent over twenty years at Hull House, working with Jane Addams and Florence Kelley. She got involved in the labor movement, working with the Factory Girls. She recalled, “I began to see the working world through the workers’ eyes.” She joined union strikers on picket lines.  As a physician, she joined the birth-control movement through the Chicago Birth Control Committee.

Her first article on occupational disease was published in 1908. Dr. Hamilton was appointed in 1910 by the governor to a commission to investigate occupational diseases in Illinois. When she began her work with a small group of physicians and student assistants, she called it a journey of exploration. Her medical colleagues said she had feminine sentimentality about the poor. In Chicago, she went to watch workers sand-papering the lead painted ceilings of Pullman cars. In smelters on the south side laborers shoveled white lead from the drying pans and breathed the deadly dust. To prove these toxins killed employees, she visited 300 workplaces, interviewed workers, and went to their homes to speak to them or to surviving relatives. She researched death records. She found Cook County Hospital filled with victims of industrial poisoning. The American Federation of Labor helped pressure for safety and compensation laws.

American medical authorities had never taken this type of health problem seriously before. Employers too were ignorant and indifferent. Dr. Hamilton recalled the manager of a lead plant who was shocked when she suggested that he was responsible when workers got lead poisoning there. He thought of himself as an enlightened, caring employer.

In 1911 Illinois passed a first attempt at compensation for industrial diseases caused by poisonous gases, fumes, and dust. It required safer workplaces and monthly medical exams for lead and arsenic workers. The law was overturned by the Supreme Court and not replaced until 1936. The National Association of Manufacturers opposed safety legislation as they opposed shorter hours and ending child labor.

During World War I she investigated munitions plants and found them in constant danger of exploding. She discussed this with then Assistant Secretary of the Navy, Franklin Roosevelt. Munitions workers’ health became a matter of national concern.

With Florence Kelley in the 1920’s she worked with the Consumers’ League to help the “Radium Girls” who were dying from their work with radium-laden paint. These women asked for the League’s help when state health departments refused to do anything. They fought for compensation and safety regulations.

Dr. Hamilton investigated lead, mercury, carbon monoxide, radium, and solvent poisoning for the federal government. She crawled over open coal pits, rode down mine shafts in open cages, and climbed up ladders to inspect vats of boiling sulfuric acid in pursuit of more details about working conditions. She toured steel mills to explore carbon monoxide poisoning, then on to California to look at mercury poisoning in quicksilver mines. The mercury studies took her to the hat industry, where workers developed shakes and mental disease from mercury poisoning, suggesting the expression “mad as a hatter.” She identified problems and recommended protective measures.

In her scientific work she learned the value of careful critical inquiry before forming conclusions. She was an independent thinker who went right to the center of action to see and assess things for herself.  In 1924 she went with a group to Russia to see the new Soviet Union. She described a government that could “hold its own only by denying people all freedom.”  She said it reminded her of Spain under the Inquisition. In 1933 she went to Hitler’s Germany and was horrified by the rigid control and violent oppression.

She became the first female faculty member at Harvard. As a woman she was not allowed to march at graduation, belong to the faculty club, or receive sports tickets. But she served on the Health Committee of the League of Nations.

Dr. Hamilton became a committed New Dealer, serving as consultant to the United States Division of Labor Standards. Her work contributed to reforms in industrial hygiene laws like the Fair Labor Standards Act. Dr. Hamilton said she was most pleased that laborers were no longer submissive or ignorant about workplace hazards. They became willing to demand better conditions for themselves. She felt this attitude was critical in maintaining safety gains.

Shortly after her death at age 101 the Occupational Safety and Health Act passed in 1970, a culmination of protective labor legislation, one of organized labor’s greatest accomplishments.  This book is a fascinating story for anyone interested in labor history or women’s achievements. It shows the dogged persistence of a woman convinced she could use her scientific training to change society for the better.