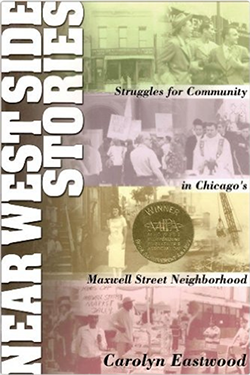 Near West Side Stories: Struggles for Community in Chicago’s Maxwell Street Neighborhood

Florence Scala was born and raised on Taylor Street on the Near West Side of Chicago, but no life story begins and ends with a particular person and his or her period. Carolyn Eastwood splendidly follows this principle, starting with a neighborhood map and ending with a bibliography. In between are the oral histories of Harold Fox, whose grandparents immigrated to the Jewish Neighborhood; Florence Scala, who was born in Chicago shortly after her parents immigrated from Italy; Nate Duncan, whose family migrated to the Black Bottom; and Hilda Portillo, born in Mexico. All discuss their immigrant roots and Chicago neighborhoods, in addition to their personal stories.

Harold Fox grew up in the neighborhood, so his story begins with his many jobs as well as those of his father, uncles and relatives. They were tailors, salesmen, delivered matzos, sold toys, woolen goods, and seltzer. The story of Jewish Maxwell Street usually refers to bygone days, but as Nate Duncan¹s story illustrates, it could have continued. Duncan became the owner of Nate¹s Delicatessen, after learning the business from his Jewish employer. To see what they did, a parking lot there–incredible–to destroy the whole market–and people came from all over the country, all over the world, to Maxwell Street.

When reviewing Florence Scala¹s story, the reader is exalted by this wonderful woman, who is willing to challenge political leaders, whom she believes are unnecessarily destroying the neighborhood. After the announcement was made by Mayor Richard J. Daley that the land given to the University would be spread well beyond the original 40 acres, a woman came to her door while she was in the middle of mopping her kitchen. She said, “Florence, what are we going to do about our houses? Are we going to fight?” Florence accepted the challenge. Although she fought hard, including running for and losing, a bid for alderman, she never left the neighborhood. She and her brother opened an Italian restaurant in the former tailor shop of their father.

Her story does not have a happy ending. “I don¹t get mad walking through the university anymore [But after attending an event at Hull-House] I left the building, there was all of downtown lit up in front of me and for the first time in years I felt tear-eyed. I thought, you bastards, you took it all, we don¹t have anything. I¹m an alien person here.”

Hilda Portillo was a later arrival to Chicago, having been raised in Mexico, part of the time in a Catholic monastery. Therefore Eastwood includes information about Spanish speaking immigrants early in the century, many of whom settled in the poorest housing on the Near West Side. When Hilda Portillo came to Chicago in 1957, her most important connection was St. Francis of Assisi Church at Roosevelt Road and Newberry, the only Chicago church that had Mass in Spanish. Her story includes the fight to save the church. “St. Francis was unique and different from all other churches in the Chicago area because it was the first step for the new immigrants, just like for me . . . the port-of-entry.” Portillo fought hard to save the Church in which she had become involved.

Because Mayor Daley and other politicians attended annual banquets, they were unprepared. When the University announced plans to build, the Mexican parishioners who lived in the area were devastated. They were displaced from what they knew as their second home. That was the only Mexican neighborhood that had Mexican products. In 1994, she read an announcement in the newspaper about the closing of St. Francis. The article said that there was little objection to the closing. Her story includes fighting church officials as well as the city, but has a happier ending than that of Scala. They collected petitions, wrote the Vatican, and had a Mass outside St. Francis when the building was closed. Portillo occupied the church in 1996 when it was set for demolition. After an investigation they found that the reasons they used for closing St. Francis were false.

When ordinary people are heard, it is usually because extraordinary people lead the struggle and inspire innovative, fervent action that is sustained over a period of time. There is absolutely no guarantee of success and almost certain substantial costs in terms of time, money, comfort, and even safety, but these oral histories show that such people do exist and can fight, concludes Carolyn Eastwood.

As a new resident of Chicago’s Near South Loop, I find their attempts to affect development in the Near West Side discouraging, but as an historian, I find their stories extraordinary. Thank you Carolyn Eastwood for a wonderful job describing the neighborhood and the people.